Sign up for Updates
Home » Profiles » Armida and Raúl Barrera 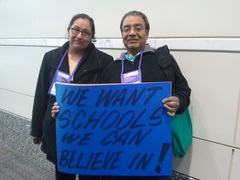 Armida and Raúl Barrera were two of the first and continue to be among the most passionate and outspoken members of Families that Can. Just as they have been incredible advocates for their children, seeking out quality educational options in south LA, they are advocates and incredible supporters of Synergy Charter School.

In 2009, the Los Angeles Unified School District board passed Public School Choice (PSC), an unprecedented initiative to reform the operation of new schools and turn around the lowest performing schools in the district. PSC allowed non-district school operators - like charter schools, teacher teams, and community groups - the opportunity to run these schools.

Synergy, which was already running a high-performing elementary school, applied to run a middle school and a high school in the same community. From reaching out to other parents to attending long board meetings and even sleeping out on the sidewalk to secure a seat at the meeting, the Armidas were there to support Synergy.