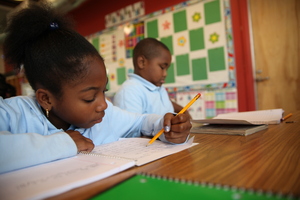 In 2008, the school, which was originally housed in a Baptist church, opened a brand-new 12,500 square foot facility with natural light and spacious classrooms. In 2009-10, the school served 352 students, 93% African American, and 91% eligible for the Free and Reduced Priced Lunch program.

Founded on the basis of high expectations and the belief that all children can succeed regardless of their background or life challenges, Watts Learning Center is part of a network of schools that also operates a middle school. The Watts Learning Center has built on the success of Head Start and other pre-school programs by creating a culture of learning in which all stakeholders — students, parents or guardians, faculty, and staff — have clearly defined roles and expectations.

Watts Learning Center has a track record of consistent high performance as well as growth over time. The school outperforms similar nearby public schools and consistently performs in the top decile statewide when compared to demographically similar schools. In 2009-10, Los Angeles Unified’s African American students’ API score was 725 - 133 points below Watts Learning Center’s. The school has received numerous accolades, including being named a California Distinguished School and the California Charter School of the Year in 2007.