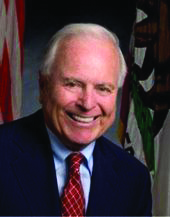 Richard Riordan, former California Secretary of Education and Los Angeles Mayor, was honored with the Supporter of the Year Award at the 18th Annual Charter Schools Conference in 2011. He is known as a major education philanthropist and activist for the past two decades by supporting major education reform in Los Angeles.

Mayor Riordan was an early supporter of efforts to reform the Los Angeles Unified School District as a founder of the Los Angeles Alliance for College Ready Public Schools, which now operates 18 high performing charter schools in the lowest-income neighborhoods of Los Angeles. He was also a founding board member for LA’s Best, an innovative and nationally recognized after school program.

In 1981, he created the Riordan Foundation. The mission of the foundation is to ensure that all children become successful readers and writers by the end of second grade. The foundation has distributed $49.3 million in grants, distributed 27,000 computers to schools in 40 states and purchased more than 180,000 books for school libraries. Riordan is a strong believer that every child has a God-given right to a quality education, and charter schools offer children just that.